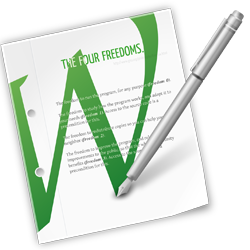 Calligra Words is a free text editor without any functional or interim limitations, developed by KDE and standing as a part of Calligra Suite. The first version of the program had seen the world on April 2012. Calligra Words is a cross-platform product: thus, it supports Linux (via dedicated package manager), Windows and Mac OS X (preliminary support).

The word processor contains lots of useful functions. Amongst them is the capability to add charts, images, tables and other timely features. In general, images customizing in this tool is as simple as a piece of cake. For instance, if you change, rotate or move the size of an image, the text will seamlessly wrap round it – just as it has to.

In addition, there is a formula editor embedded into the application. Formulas in the word processor are provided by the Formula plugin. It is a simple and intuitive visual formula editor with a WYSIWYG design.

Also Calligra is eligible for saving and converting the files in several formats: ODT (as a native Calligra Words extension) and Microsoft Word documents. If you would like to see the program with your own eyes, simply download Calligra Words for free from the official web-resource. The versions for all the compatible operational systems are presented there. The app supports the following formats: odt, docx and doc. 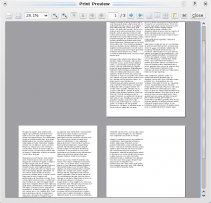